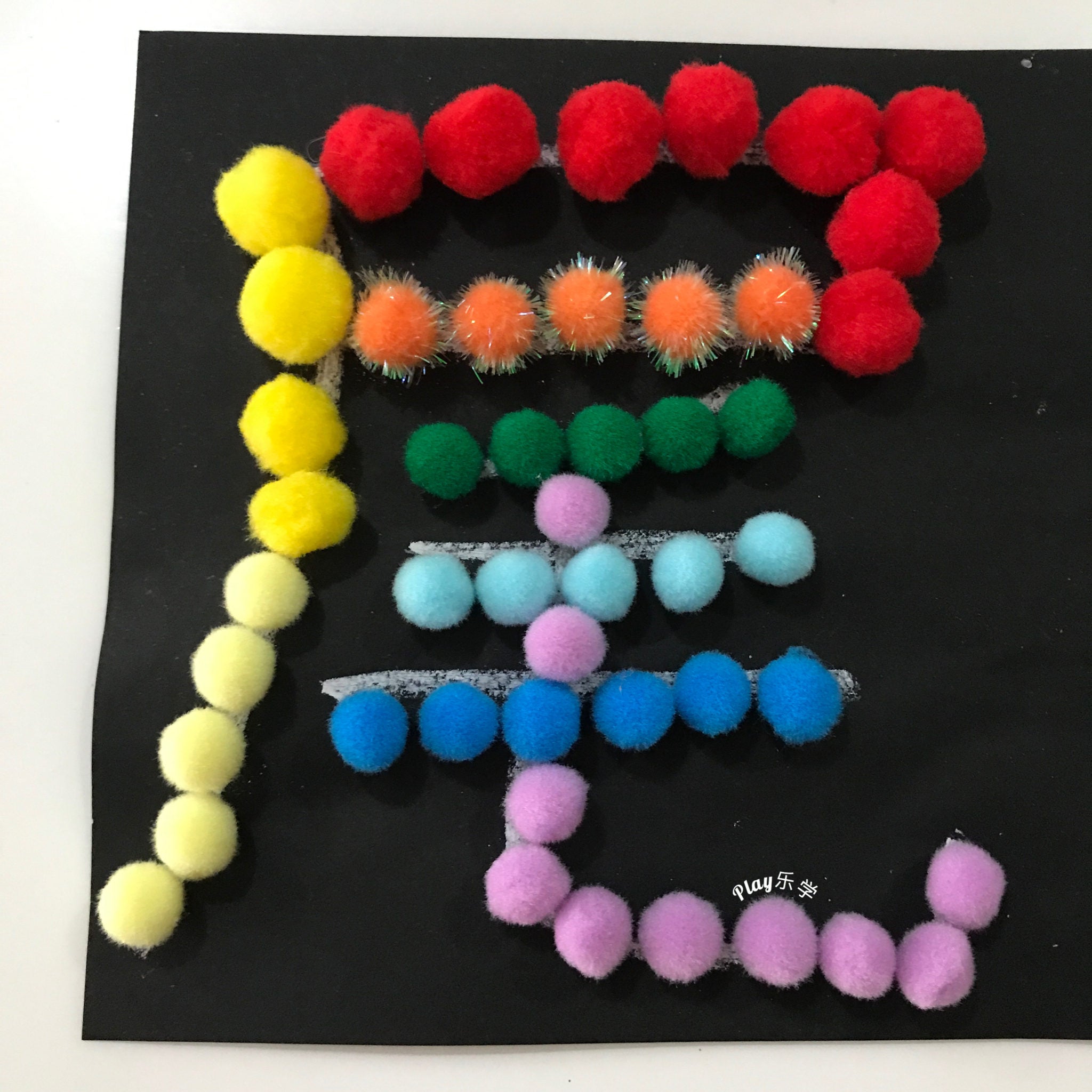 We visited on the first day after seeing the article by Singapore Motherhood. We were very lucky to chance upon a workshop shortly after arrival. Q and I had a blast at all of the exhibits, especially the short films (which he was scared of going in to watch the year before). I was very inspired and decided to follow up with some home activities. 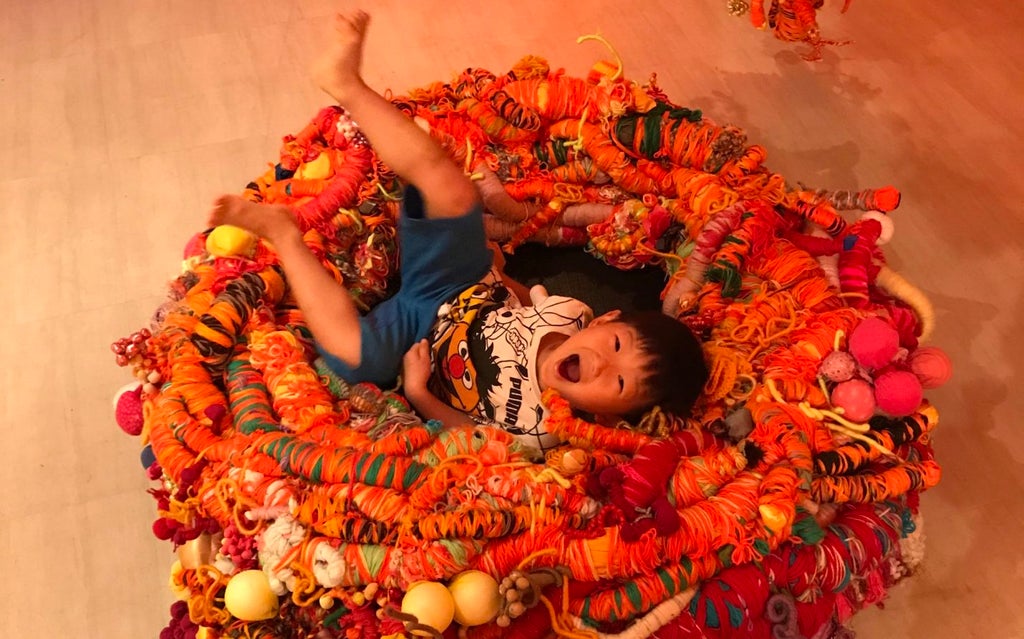 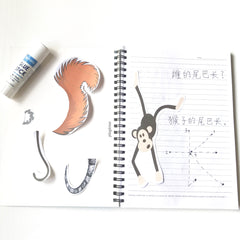 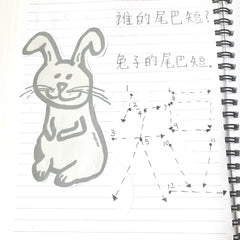 This activity was inspired by the Lizard Tail exhibit. I printed pictures of a few animals for QR to match their tails based on the verses I made up, and we had a simple question-and-answer session. This was good for his learning to answer in complete sentences, and about simple sentence structures. I wrote these by hand in a spare notebook, to start a compilation of QR’s work for him to revisit freely. 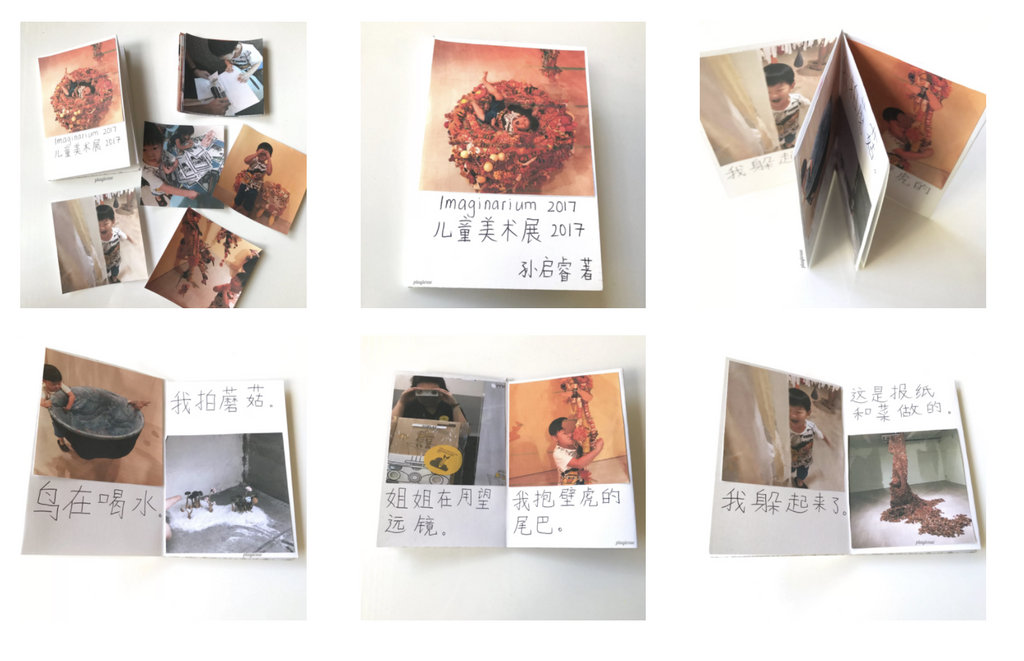 This little DIY book was made from a single sheet of drawing block paper. A few folds, one cut and that’s it!I printed out the photos we took at the Imaginarium, cut them out and let QR choose which ones he wanted to include in his book. He glued on the photos with a glue stick. He then thought about what he wanted to write for each photo, and I verbally edited it, then wrote it down as he repeated the sentence.I love books, and I want QR to love books. For now, he loves being read to. When we go along with his requests to read the same book for the millionth time, he can read it from memory after a while! I am hoping that he will re-read these little books that we write together.

漂浮彩虹山: Making our own floating mountain

The floating mountain exhibit at Imaginarium had its own little activity corner for children to make 3D floating mountains out of egg cartons and string. I thought this was a perfect opportunity to introduce the Chinese character, 山 shān, which is a pictorial character—象形字。

The video above shows how the character came to become what it is today. You can search for 山字的演变 on YouTube to find similar videos. 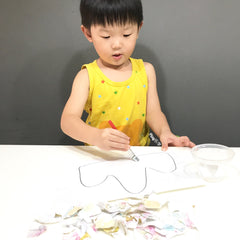 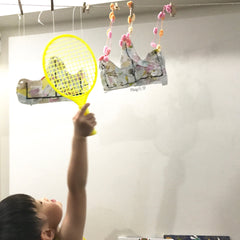 First, I drew an outline of a mountain, then I had QR tear up one of his old process art pieces. He is finally getting the hang of tearing—it’s very good finger exercise! Next, I showed him how to paste the coloured pieces inside the outline, so we could form a mountain collage. For this, I found it was better to use a brush in a bowl of glue, rather than a glue stick. We waited for the glue to dry completely before I wrote the character 山 for QR to trace with a thick marker. Finally, we punched 3 holes at each of the mountain peaks, and tied strings for hanging—and there you go, your very own 2D floating mountain, 漂浮山。

We hung it up and after I demonstrated how to make it wobble, it turned into a mega bash-the-mountain-till-it-flips-upside-down game. Well, it’s good that QR can enjoy his art 😄 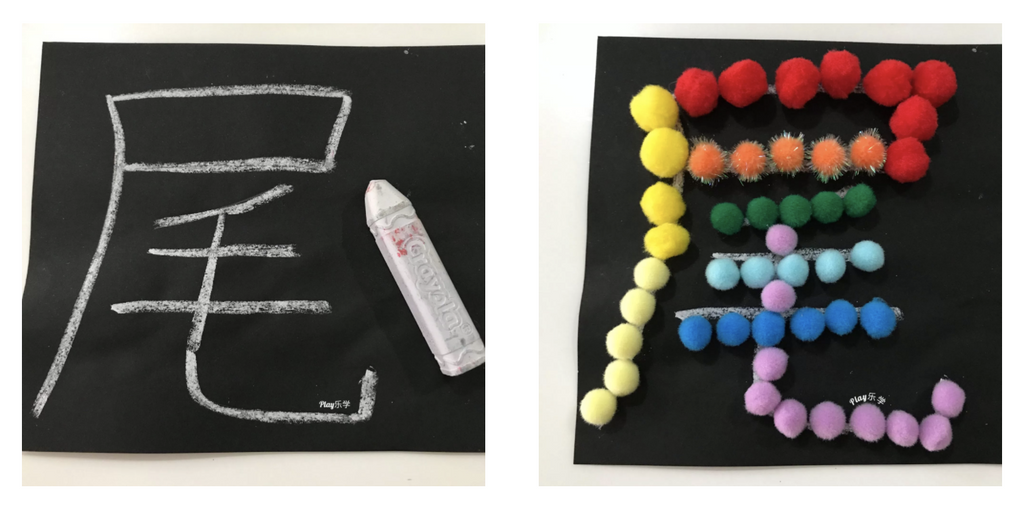 We used pom poms as rabbit tails to form the character 尾。I used chalk to write the character on black paper—I originally wanted to use white pom poms but realized that I don’t have enough. So rainbow tails it was!

I hope you have enjoyed reading this. Do tag us on Facebook or Instagram if you do try out these activities! Please feel free to let me know what type of activities you’ll like to see too. Have a great weekend!

Migration in progress — no orders will be fulfilled at this time. For enquiries, please email [email protected]. Dismiss